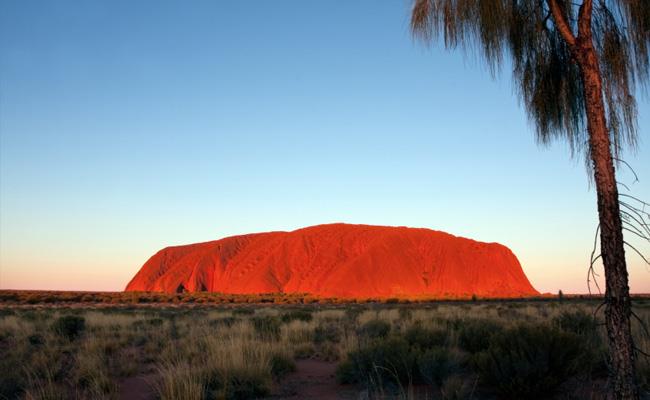 Rising from the broad desert plain in the deep centre of Australia. Uluru/Ayers Rock is Australia’s most recognisable natural icon.

The famous “Rock” stands348 metres high and, like an iceberg, has most of its bulk below the surface. It is located 440 kilometres south-west of Alice Springs in the Uluru-Kata Tjuta National Park. Forty kilometres to the west of Uluru/Ayers Rock is Kata Tjuta, also known as The Olgas. This massive pile of rock domes dates back 500 million years.

Both Uluru and Kata Tjuta have great aboriginal cultural significance for the Anangu traditional landowners, who lead walking tours that inform about the local flora and fauna, bush foods and the Aboriginal Dreamtime stories of the area.

Uluru/Ayers Rock is best visited at sunrise or sunset. Seeing this 348-metre tall natural wonder glow in the changing sunlight is mesmerizing.

As ruggedly beautiful as it is culturally significant, visitors to Uluru/Ayers Rock are entranced by the unmistakeable spirituality of the region.

The adventure experiences on offer here are not for the faint-hearted. Get an Uluru experience with a difference and trek the 9-km Uluru base walk, take to the skies in a helicopter, jump on the back of a camel or feel the wind in your hair with a ride on a Harley Davidson.

Until recently, this monumental landmark was known as Ayers Rock, as named by European explorer William Gosse in 1873 and often misspelt as Ayres Rock. Today Uluru is jointly managed by the Anangu people and Parks Australia.